Anna Khaja, Next Exit super-bride ’03, will be guest-starring on NUMB3RS this Friday, March 31st at 10 p.m. on CBS. She plays “Saida Khafaji,” the murder victim! Many of you probably haven’t seen the show, but Adi and I are addicted to it and have TIVOed it every single week since day one. You can also see her currently starring in the 2006 Director’s Festival one-act “I stand before you naked” at the Open Fist Theater. She has also directed one of the other one-acts in the same festival, “AMP,” written by her husband, Next Exit groom, Chris Rossi.

Almost 5 years ago, I paid one dollar to get Anna’s phone number when she posted on one of those signup wedding sites looking for a wedding planner. She landed up hiring me to plan her amazing wedding at Saddlerock Ranch in Malibu, California and then hired Adi to shoot it! We have since become best of friends. 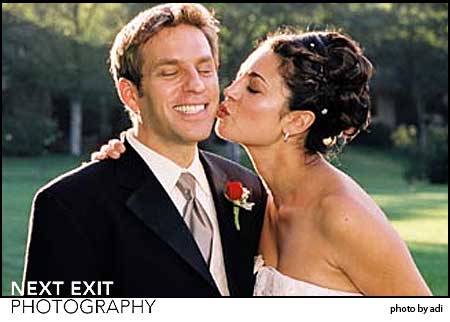 Posted in Next Exit Client News